One of the hardest things about getting in front of the camera is that feeling that everybody's watching you, and they are kind of watching you. I mean, there's no escaping that. If you put your video up on a social media channel, people are gonna watch it, but that's the idea, isn't it?

So how'd you get over that? How do you get over the fact that it's easy to talk to a person, in person, or to talk to five or six or 10 or 20 people in a group in person and that somehow when you click record on a camera, you dry up, everything goes really tense and you start feeling like you can't do it or that things are going wrong.

Well, in this video, I'm going to run through three things that are going to help you get that camera rolling and get yourself feeling confident in front of it.

Number one, there's a big leap between what you think you look like and what everyone else thinks. You look like. The classic thing, when you record your own voice or get in front of a camera is that you think,

Number two, when you hit record, you kind of feel like you're broadcasting to the entire world. And that can be a little bit overwhelming. It's much easier to think about talking to an individual person, one person in a room that, you know, rather than talking to a whole bunch of people that you don't know.

So think of a client or friend or somebody that, you know, create video for that person that solves the challenge or shares your expertise, but really just make it for that one person. When you watch it back. I bet that you'll find that that video is broadly watchable and much better and probably more warm and personal than if you try and imagine that you're talking to a big audience and remember, you don't even have to publish the video.

One of the things about creating content like this, is you can put it on your hard drive, leave it on the shelf, leave it for a couple of days a week, come back to it, see how you feel about it. And you might find that your opinion changes about that and it feel more comfortable with publishing it. In which case you can publish it. But if you allow yourself to acknowledge that you're going to do that in the creative process, it takes a little bit of the weight off your shoulders as well.

Number three, pick your moment, pick a day where you feel positive, where you feel energised, where you feel like you can do stuff and then get up in front of the camera and batch a whole bunch of stuff, do four or five videos. If you can, you'll get into the flow of it. And you'll find that your presentation gets a little bit easier, but also you'll be able to head start because you've picked a good day.

I've tried to do videos on days when I'm just tired, or I just haven't got the energy or the motivation and they never work as well. They always take longer. You get more, more of a feeling of being defeated by the whole process.

So pick a day where you feel energized. If you've scheduled it for a Wednesday and you don't feel like doing it, don't do it. Try and move some stuff around and wait until you can do it. And then pick that moment. And you'll find that results in much better.

Tip number four. Did I say there was only going to be three tips? I think I did. Well. You get four! Lucky! Prerecorded video is one thing. Live video is another. And oddly live video is sometimes a bit easier because when you press that record button, there's really no gaming back. And your audience is watching and you can't be particular about those little mistakes.

You can't go, Oh, I got that word wrong. I need to go back and do it again. You can't repeat yourself. You just have to push on. And actually that's more like a real life situation in the sense that you're in a room, teaching a session or talking to some people or walking through a sales presentation or whatever it is. So actually sometimes live is a bit of a deep dive or sort of a plunge into a cold pool.

And sometimes that's an easier way of getting used to being in front of the camera and you'll get different results from that. People are more forgiving of it because it's live. And then you might find it's easier to come back to the kind of created, creative video content, which is kind of pre-made like this video.

Okay. I hope these four ideas were useful for you. If you've got ways that you use to get in front of the camera and to get your energy in your frame of mind and your kind of direction, right. Then always useful and interesting to hear about them in the comments below. For now I'll see you in the next video. 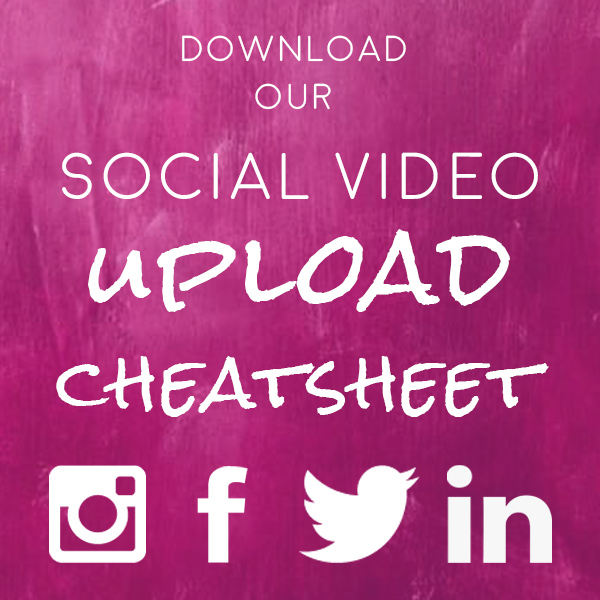